Home » Classified » What It’s Really Like To Get Male Liposuction 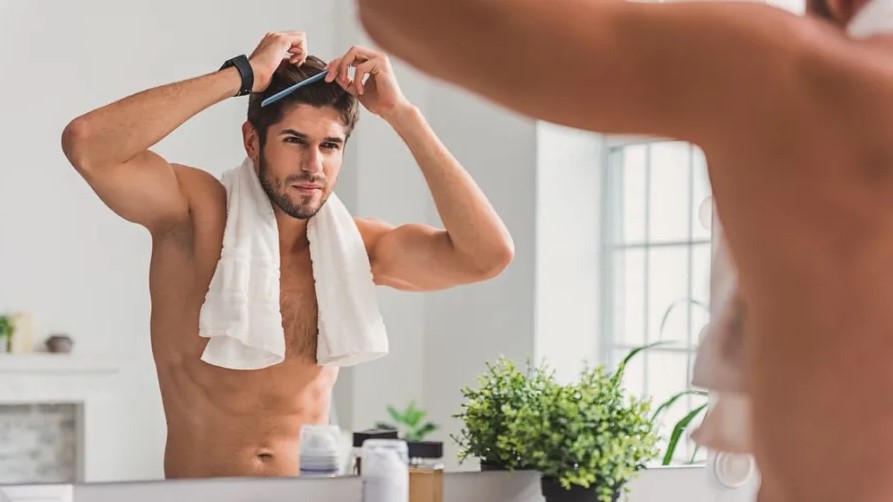 Men are increasingly seeking the help of cosmetic surgeons to achieve their dream physique through plastic surgery. One of the most popular procedures among them is liposuction and liposculpture, which involves extracting unwanted fat cells in a targeted way to reshape and tone the body. When it comes to male liposuction, there can be various ways to address the concerns specific to men. We spoke to plastic surgeon Gregory Buford, MD to discuss the procedure, as well as real male patients who have had liposuction about their experiences.

Liposuction vs. Liposculpture: What’s the Difference?

Liposuction is carried out by making small incisions on the body to insert a hollow tube known as a cannula. As the cannula is moved around in the deeper layers of fat, cells are broken up and vacuumed out of the body. It is a versatile procedure that is popular with men because it can be focused on the specific problem areas that they haven’t been able to address through diet and exercise alone. A physician will plan out how much fat to remove and from which areas ahead of the procedure.

Some physicians also offer liposculpture, a method similar to liposuction, but is used to create the illusion of muscle gain by relocating fat throughout the body, like a more pronounced six-pack or pectoral muscles. Whether the doctor advises liposculpture or liposuction depends on the desired results, but long term maintenance is always taken into account. “The issue with liposculpture is if the patient were to gain weight in the future, the sculpted areas can look unnatural,” says Dr. Buford.

Is There a Difference in Male and Female Liposuction?

Common areas of concern for men are the lower abdomen, flanks (love handles), and upper arms. Many are started to request their chest, thighs, chin, and neck as well. Liposuction and liposculpture as a cosmetic procedure does not change based on the gender of the patient, but particular anatomy is taken into account. The recovery is no different either. Patients are able to return home as soon as the effects of the anesthetic have worn off and should avoid strenuous activity for around a week. This rest period is particularly important for active men. “Any activity involving a twisting movement, such as golf, should be avoided for a week after the procedure too,” says Dr. Buford.

All patients will also want to keep in mind that maintaining a long term healthy lifestyle is key to keeping results from liposuction surgery for as long as possible. It is possible to have revisions down the road, either on a different area entirely or to improve the initial results following weight loss or gain. The average cost of liposuction in the US is $6,000, but can vary widely depending on the area being treated and the anesthesia used during the procedure.

Matt lost 50 pounds after college by following a strict diet and exercise regimen, but had stubborn fat in his flanks (love handles). He decided to look at surgical options to address his unhappiness with this area. At his consultation, his cosmetic surgeon suggested he consider liposuction.

AEDIT: Why did you decide to have liposuction?

Matt: “I had worked so hard on my body to get myself to a place where I liked what I saw in the mirror, but there was this one area of stubborn fat that I just couldn’t get rid of. I ended up looking at surgical options and my surgeon suggested liposuction. I researched the procedure, discussed the recovery process and longevity of results with my surgeon, and decided it was a good option for me.”

Matt: “It was actually the first surgery I’ve ever had, so I had no clue what to expect, but it was very straightforward and I felt very safe throughout. I had my procedure under general anesthesia and when I woke up I was comfortable. I had very little discomfort during the entire recovery process. I’d booked a week out of work to give myself time to recuperate, but I actually didn’t even need that long. I had time to relax and get a few chores done before I went back to the office which was excellent!”

AEDIT: How satisfied are you with the results?

Matt: “I’m really happy with how it’s turned out. I think it’s one of those things that you notice so much more on yourself than on anyone else. When I look back at the photos of myself before I had the surgery and compare them to how I look now, I can see a massive difference, not only in how the area looks, but also in my attitude. It’s a small procedure that’s made a big difference in my confidence.”

AEDIT: Do you have any tips for patients who are considering having the procedure?

Matt: “The surgery itself is not something to be worried about at all and it’s really quite easy to recover from. I would recommend finding a surgeon that you feel you can trust. That made all the difference for me.”

Joshua is an ex-varsity athlete who had been trying to tone his lower abs for years. He had a visible “four pack” when he was a student, but he’d tried for years to get a six-pack with no results. A friend recommended liposculpture to him, and after some research he decided to go for it.

AEDIT: How would you describe your body type before and after the procedure?

Joshua: “I have always been athletic but with age, I lost muscle tone and became heavier in the lower abdomen, which had always been a problem area for me, as well as my male breasts. I wanted to have liposculpture to remove the excess fat from those areas. Instead of straight liposuction, I opted for liposculpture because it allowed me to have a toned six-pack for the first time in my life.”

AEDIT: Were the results what you expected?

Joshua: “The results were more subtle than I had expected, but not in a bad way. I imagined that the area would be super toned, but in fact, it looked pretty natural as soon as the swelling went down. It has settled more in the months following the procedure. For me, it wasn’t a case of turning my athletic physique into a bodybuilder’s, but it was a way for me to achieve the look I had tried to get through the usual routes and had not succeeded. The results definitely met my expectations in that regard.”

AEDIT: How was the recovery process for you?

Joshua: “I made sure to follow the guide I had been given by the doctor and rested when I needed to. There was some pain during the first two days post-surgery, but aside from that, it was smooth enough for me to consider having it done all over again if I ever wanted to. The scarring concerned me, but they are tiny marks that my surgeon hid as best as possible. They have faded so well already that I’m not bothered by them now.”

AEDIT: Do you have any advice for patients considering the procedure?

Joshua: “The main thing I had to learn was to not expect miracles. The methods used and the technology available is mind-blowing, but your body will still be your body once the surgeon is finished with it. I had to go through a period of adjusting to my new look and getting my head around the fact that even though I now had the body I’d always wanted, but I didn’t necessarily feel the way I thought I would. It was more than just a physical transformation for me.”

Alex had always though he had a weak jawline, but as he got older he developed a double chin and excess fat around his neck and jaw. He was increasingly unhappy with how he looked and consulted a cosmetic surgeon to discuss options. He was surprised when liposuction was suggested, since he had only heard about the procedure for other areas of the body, and decided to undergo the procedure a few weeks after his initial consultation.

AEDIT: What was the initial consultation with the physician like?

Alex: “I went into my first consult without much of an idea of what the surgeon would suggest for my double chin. I had done some basic research, but I figured I’d leave it to the expert. We discussed what kind of a result I wanted and I had some pictures of me when I was younger and also some ‘jawline inspo’ photos. After taking a look, the surgeon suggested liposuction. It wasn’t something I had thought of before, but it made sense. I asked about how the procedure works, whether I’d be under general anesthetia or not, and how much scarring there would be. The answers were all fine by me and I decided to get the procedure booked.”

AEDIT: Are you pleased with the results?

Alex: “I’m so happy with how the area looks now and the scars are barely visible. I don’t think anyone would notice the scars unless I pointed them out. The fat reduction was amazing. Even with the swelling straight after the surgery, I could see the result. Over the following weeks and months as everything settled in, I became even more pleased with how it looks.”

AEDIT: Do you have any advice for people considering having the same procedure?

Alex: “Be guided by your surgeon. I had a clear image of what I wanted the result to look like, but I trusted my surgeon to advise me on how to achieve that result. Follow the steps they tell you after the procedure. I had mine with local anesthesia, so I went home the same day and the advice the doctors and nurses gave me made the process much easier.”

Global Beauty Trends: The Perception of Beauty Around the World

How to dress in a casino: dress code for men

How to dress in a casino: dress code for women